1) Foreigners “Like Seeing Our Children Die”
Addressing a November committee meeting of the Organization of Islamic Cooperation in Istanbul, Erdogan railed against “foreigners” hostile to the Muslim world. “They look like friends, but they want us dead, they like seeing our children die. How long will we stand that fact? I speak openly; foreigners love oil, gold, diamonds, and the cheap labor force of the Islamic world. They like the conflicts, fights and quarrels of the Middle East.”
2) The Muslim World - on its Own - “Can Resolve Every Problem”
Erdogan also told the conference “the only condition to overcome the crisis in the Islamic world is unity, solidarity and alliance. Believe me, we can resolve every problem as long as we are united.” He specifically said Muslims together can solve the problems of Palestine, “the bloodshed in Iraq and killing of Syrian children.”
3) America Was Discovered by Muslims 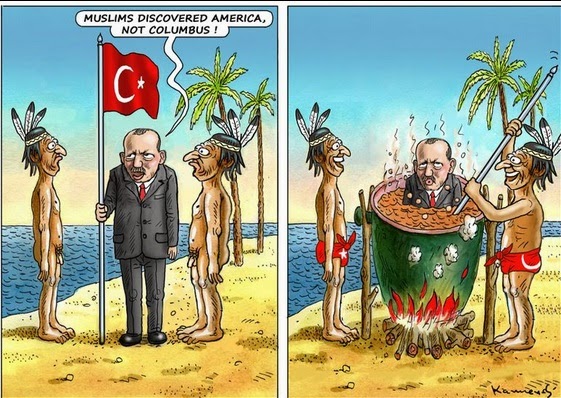 “Muslim sailors arrived on the shores of America in 1178,” Erdogan told the first meeting of Muslim leaders from Latin America in November, adding that “in his diaries, Christopher Columbus referred to the presence of a mosque on top of a mountain in Cuba.” Erdogan then said he would build a mosque “on that hill,” if the Cuban government allowed. He said this despite there being no evidence of any pre-Columbus Muslim structure in Cuba, or anywhere else in the Western Hemisphere.

4) Gender Equality? It’s “Against Nature”
“You cannot bring women and men into equal positions,” Erdogan said in a November speech. The issue is a particularly sensitive one in Turkey, which during decades under a secularist leadership that Erdogan now reflexively pillories had been the model in the Muslim world for the advancement of women’s rights.

5) Israel has “Surpassed Hitler in Barbarism”
During the Israeli incursions into Gaza last July, Erdogan spoke at a rally and repeated his frequent criticism of the Jewish state. “Those who condemn Hitler day and night have surpassed Hitler in barbarism,” he said. More recently, Erdogan slammed Israeli Prime Minister Benjamin Netanyahu’s attendance at the anti-terror rally in Paris on Sunday, saying he could "hardly understand how he (Netanyahu) dared to go.”

6) Birth Control is “Treason”
Though Turkey has one of the younger and more vibrant populations in Europe, Erdogan used the occasion of a wedding last month to denounce attempts at family planning. Saying more children were needed “to take Turkey above the level of modern civilizations,” he said those who disagreed “have been engaged in the treason of birth control for years, and sought to dry up our generation."

7) “We’ll Eradicate Twitter”
Speaking at a Turkish campaign rally last year, Erdogan blasted the social media tool. “I don’t care what the international community says,” he proclaimed. “Everyone will witness the power of the Turkish Republic.” Twitter, Facebook and other social media services have since faced regular disruptions across Turkey.

8) And Maybe the Whole Web
“I am increasingly against the Internet every day,” Erdogan was quoted as saying at an October meeting of the Committee to Protect Journalists (CPJ) in Ankara. “Media should never have been given the liberty to insult.” It is in fact illegal to insult the president, as evidenced by the recent arrest of a 16-year-old boy who referred to a “thieving” Erdogan during a small public rally. The boy was released after intense public outcry, but could still be tried and sentenced to up to four years in prison.

9) Robots Are Out to Get Him
Erdogan told a group of his ruling Justice and Development Party last year that his opponents relied on “lobbies” in their attempts to attack him. More specifically, “the robot lobby that they set up on social media hits with tweets. They tell them to increase the number of tweets.” His comments were ridiculed by the very “tweets” he aims to silence, with some posting satirical, Photoshopped images of Erdogan or Turkish police challenged by robot protestors.
10) Foreigners don’t like Muslims, only their money

“I speak openly; foreigners love oil, gold, diamonds, and the cheap labor force of the Islamic world. They like the conflicts, fights and quarrels of the Middle East. Believe me, they don’t like us,” said Erdoğan during an address to an Islamic association on Nov. 27.(Click here to read more about this story)

11) Whether they want it or not, Ottoman language will be learned

“There are those who don’t want Ottoman [language] to be learned and taught. This is a very big danger,” Erdoğan said on Dec. 8, delivering a speech at “5th Religion Council” hosted by the Directorate General of Religious Affairs (Diyanet) in Ankara. “Whether they want it or not, Ottoman will be learned and taught in this country,” he pledged.(Click here to read more about this story)

Erdoğan took time out of a stroll through Istanbul’s Esenler district on Nov. 2 to take umbrage with a man smoking a cigarette in a nearby café before ordering the municipal patrol to fine him. “You see, this guy is just sitting there and keeps smoking even after the president tells him not to,” he said. (Click here to read more about this story) 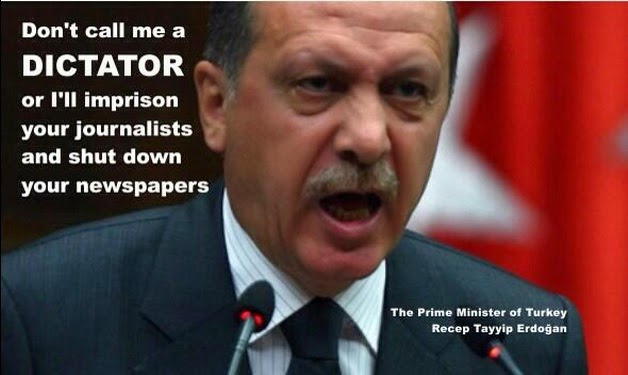 Erdogan casting the first stone An increasing number of journalists have faced character assassination, with President Recep Tayyip Erdogan setting the tone in public speeches. Those targeted by Erdogan are instantly flooded with threats and insults on social media. As a result, some have been recalled from Turkey and others have tried to keep a low profile. Many worry about being denied residence permits.
http://www.al-monitor.com/pulse/originals/2015/01/turkey-press-freedom-foreign-journalists-spies.html
14) Turkish president Erdogan declared Laurence of Arabia a bigger enemy than isis

In a stunning speech, Erdogan railed against Western “spies” and journalists and seemed to endorse the ISIS plan to redraw the region’s borders.GAZIANTEP, Turkey — Turkish President Recep Tayyip Erdoğan took on the iconic Lawrence of Arabia Monday in a furious anti-Western diatribe.  The Turkish president compared the outside meddling in the region now to the role the renowned British army officer played during the Arab Revolt against the Ottomans during World War I. And Western diplomats here say the tirade bears a rather striking resemblance to some of the propaganda that has come out of the so-called Islamic State, widely known by the acronym ISIS or ISIL.
http://www.thedailybeast.com/articles/2014/10/13/turkish-president-declares-lawrence-of-arabia-a-bigger-enemy-than-isis.html 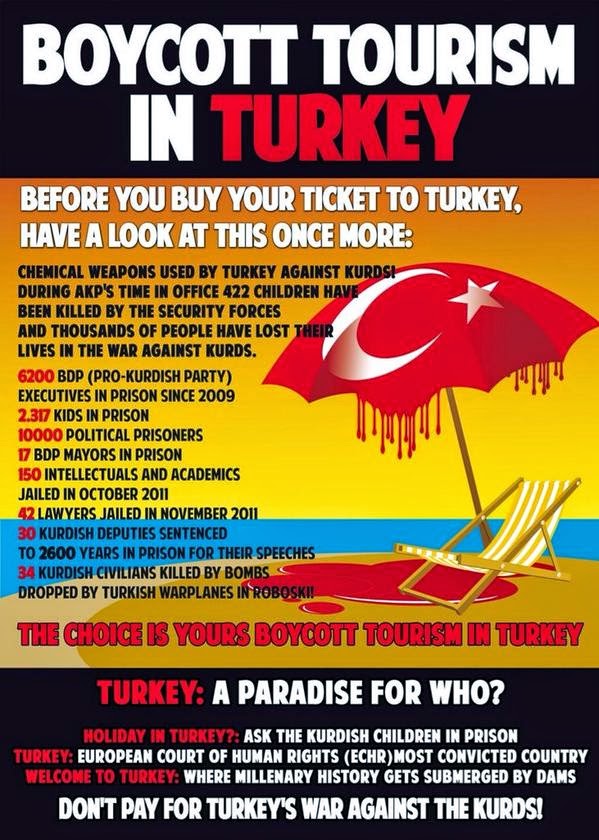 Turkish President Recip Tayyip Erdogan’s increasingly bizarre rhetoric continued this week when he told reporters Muslims have "never taken part in terrorist massacres" and appeared to blame the West for the recent Islamist attacks in Paris.The NATO nation leader and western ally has moved his powerful nation further from its Constitutionally-mandated secularism in recent years, and has drawn criticisms for not doing more to stop the flow of foreign jihadis, who pass through Istanbul on their way to join Islamic State in Syria and Iraq. But Monday's comments, against the backdrop of near-universal condemnation of the Islamist attack on French satirical tabloid Charlie Hebdo, could further isolate Erdogan from the West.