The Saudi Arabia and Kuwait “Outposts Project”: Al-Qaeda and Its Affiliates

INSS Insight No. 517, February 16, 2014
Udi Dekel, Orit Perlov
The challenge to regional stability, be it by the revolutionaries operating against national state structure or by civil wars dominated by the conflicts between Sunnis and Shiites, along with a deep mistrust regarding United States willingness to support its regional allies in a crisis, has pushed the Gulf states into a corner in terms of their ability to maneuver. Therefore, Saudi Arabia and Kuwait have opted for the
policy of supporting Islamist opposition groups fighting Assad, Malaki, and Nasrallah. Gradually, the Saudis have come to the conclusion that they must develop their own proxies in order to influence the regional dynamics for its own benefit. The logic behind it is that forces of destruction, rather than constructive forces, have an increasingly more significant role in shaping the future of the Middle East and in establishing a radical Sunni axis to counter and ultimately break the Shiite axis.

Arab World, Gulf States
Background
Since the start of the “Arab Spring,” there have been many changes in the balance of power among the regional players, and various alliances – such as between political Islam and the Muslim Brotherhood’s "The Nahda Project," funded and promoted by Turkey and Qatar under the slogan “Islam Is the solution” – have failed. In addition, Iran has acted aggressively throughout the Arab world defending and strengthening the Shiite axis. It has recruited Iraqi President Malaki and mobilized its proxies to help the Assad regime, from the Iranian Quds Force through Assad’s own Shabiha to the Lebanese Hizbollah, to neutralize and push back both the insurgents and the various Sunni Islamists groups that took control over the Syrian opposition.

The challenge to regional stability, be it by the revolutionaries operating against national state structure or by civil wars dominated by the conflicts between Sunnis and Shiites, along with a deep mistrust regarding United States willingness to support its regional allies in a crisis, has pushed the Gulf states into a corner in terms of their ability to maneuver. Therefore, Saudi Arabia and Kuwait have opted for the policy of supporting Islamist opposition groups fighting Assad, Malaki, and Nasrallah. Gradually, the Saudis have come to the conclusion that they must develop their own proxies in order to influence the regional dynamics for its own benefit. The logic behind it is that forces of destruction, rather than constructive forces, have an increasingly more significant role in shaping the future of the Middle East and in establishing a radical Sunni axis to counter and ultimately break the Shiite axis.

The Saudi Royal Family: The “Bandar Plan"
Bandar bin Sultan, the head of Saudi intelligence and formerly the long-time Saudi ambassador to the United States, currently heads the kingdom’s policy and strategy on Iran. Saudi Arabia, which views Iran and the Shiite axis as an existential threat, is acting on various levels and through different channels to stop or at least limit Iran's capabilities for regional hegemony. A year after the outbreak of the revolution in Syria and its deterioration into civil war, a strategic decision was made that the kingdom must use all means to prevent a victory by Assad and Iran. Therefore, it formulated a plan known throughout the social media as the "Bandar Plan," comprising three elements: (a) establishment, financing, and equipment of opposition movements, battalions and rebel groups by Saudi Arabia (the Free Syrian Army was replaced by the Islamic Front and Salim Idris was replaced by Zaharan Aloush, a Saudi Arabian leader); (b) infiltration of existing al-Qaeda affiliated groups by Saudi Arabian agents and fighters (such as the Abdullah Azzam Brigades, affiliated with al-Qaeda’s Lebanese branch, headed by Majid bin Muhammad al-Majid, a Saudi jihadist); (c) influencing of jihadist groups that have yet to be infiltrated, through new media and online forums. Two training and coordination command centers – one in Irbid, Jordan, and the other in Taif in Saudi Arabia – have been established in order to coordinate action and transfer money and weapons from the Gulf states to the various rebels organizations in Syria. Two years after the inception of the Bandar Plan to assist the rebel groups in Syria, the Saudi assessment is that the stalemate between the two sides proves that the plan’s objective has not been achieved.

The Wahhabi and Salafist Clerics: The Outposts – al-Qaeda and its Affiliates
In tandem with the Bandar Plan, which has so far failed to consolidate the power of the Syrian rebel groups and ensure a Sunni victory over the Shiite axis, the Wahhabi and Salafist clerics, as well as private donors in Saudi Arabia and Kuwait, have begun recruiting and financing extremist jihadist fighters in Syria, Lebanon, and Iraq. The results are already apparent in the form of the emergence of al-Qaeda and affiliated outposts along the entire “Shiite crescent”: ISIS (the Islamic State of Iraq and al-Sham) and the al-Nusra front, which – in addition to its bases in Syria – have also built headquarters in Tripoli and Sidon in Lebanon and Anbar Province (Ramadi and Fallujah) in Iraq. While the fighters come from many Arab and European countries, a majority of the financial aid, religious guidance, and training come from Saudi Arabia and Kuwait.

The discourse in social media, along with the rhetoric of Wahhabist and Salafist clerics such as Dr. Jamaan al-Herbesh (Kuwait), Dr. Shafi al-Ajami (Kuwait), Salman al-Ouda (Saudi Arabia), Ahmad al- Shugairi (Saudi Arabia), Dr. Awad al-Qarni (Saudi Arabia), Adnan al-Arour (Saudi Arabia) and Dr. Muhammad al-Arifi (Saudi Arabia), points to a close connection between al-Qaeda and its affiliates and the various jihadist-Salafist movements. In their sermons on YouTube, these clerics call for a war of jihad against Shiite movements and leaders, whom they call Takfiris (heretics), against Hizbollah, referred to as "Hizb al-Shaytan" (army of the devil), against Iraq's Prime Minister Maliki, “the heretic”; against the Alawis, referred to as Safavids (a Salafist pejorative); and against Assad, who according to them deserves to die. They call on their followers (totaling five to seven million people on Twitter and Facebook) to mobilize for jihad. They also run evening gatherings, Diwaniyas, where they solicit donations for the troops on the ground. Each brigade produces YouTube videos that showcase their fighters and include words of praise and thanks to the "private donors" who send money.

It seems, that although the Saudi royal family doesn’t directly support the Wahhabi clerics and rebel groups, it does turn a blind eye to these activities in order to reap the short term gain in the war against the Shiite axis and in order to make clear both to the world and to the regional arena – without saying so explicitly – that it has the ability to generate negative processes that in the future can take a heavy toll on all the players involved.

The Outposts of al-Qaeda and its Affiliates along Israel's Borders
At the start of 2014, Israel faces a rising new challenge. The weakening of the nation states along Israel's borders has enabled non-state organizations and jihadist and Salafist groups to set up outposts in these countries, along its borders (Islamic Jihad in the Gaza Strip, Ansar Beit al-Maqdas in the Sinai Peninsula and active also in Cairo and the Canal cities, the Salafist Front and the command center of the Syrian Islamic Front in Jordan, ISIS and the al-Nusra Front in Syria, the Abdullah Azzam Brigades, the al-Nusra command, and the Salafist movement in Lebanon). These groups act in three different arenas: (a) fighting against the Shiite axis to topple the Assad regime; (b) ridding the region of the secular Sunni leaders and establishing an Islamic caliphate in their place; (c) confronting the West and Israel.

Over the years, the State of Israel has witnessed the growth of global jihadist movements, including al-Qaeda. Given that Israel was not at the center of these developments, which primarily took place far from it (except for a few sporadic attacks inside Israel) and that they did not represent an existential threat, Israel preferred to watch the events unfold from afar, strengthen its defense mechanism, and allow others – primarily the United States – to tackle al-Qaeda’s cells head-on. In addition, the sense was that in large part due to the internal strife in Syria and Lebanon, these elements were “doing the work” on Israel’s behalf and weakening the Iranian-led Shiite axis.

Nonetheless, the threat against Israel and the implications of the threat must be reassessed, given the increasing weakness of the regional states, the erosion of their governance capacity, the emergence of jihadist al-Qaeda-affiliated groups into the power vacuum, and the construction of outposts near Israel’s borders, threatening the stability and sovereignty of Egypt, Jordan, Lebanon, and the Palestinian Authority. The key question is whether Israel’s current inactivity will lead to the consolidation of global jihadist movements and al-Qaeda affiliated groups near its borders, thus creating a substantial threat to the State of Israel. In addition, if Israel is interested in stability and maintaining its peace treaties with Egypt and Jordan, it must examine whether its passivity, lack of intervention in regional processes, and insistence not to act against al-Qaeda strongholds – which until now was sound policy – must change in order to prevent the negative consequences of a widened ripple effect of chaos in the region, which will end up reaching Israel.
bron http://www.inss.org.il/index.aspx?id=4538&articleid=6608 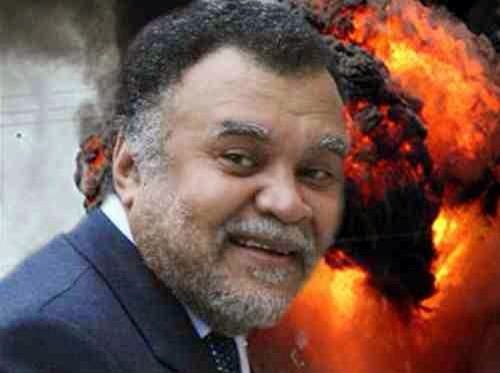 Report of the Secretary-General on the United Nations
Disengagement Observer Force for the period from
4 September to 19 November 2014
bron http://www.un.org/en/ga/search/view_doc.asp?symbol=S/2014/859

The Saudis Helped Create a Monster They Can’t Control in Iraq http://www.slate.com/blogs/the_world_/2014/06/16/the_saudis_helped_create_a_monster_they_can_t_control_in_iraq.html?wpsrc=sh_all_dt_tw_ru via @@joshuakeating 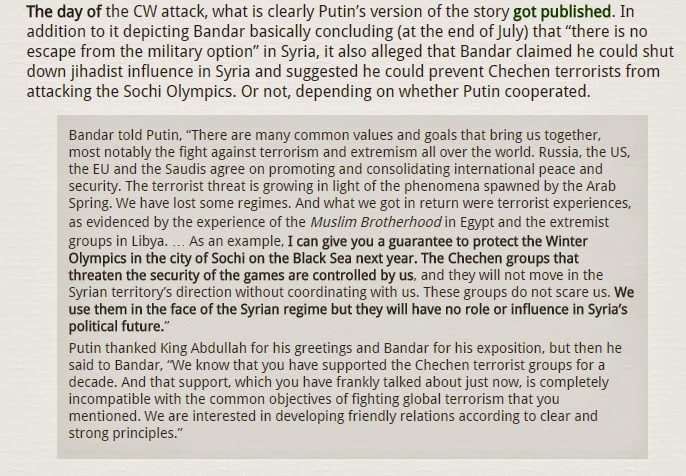